Our last stop in California was Redwoods National Park. As with all our stops along the way it came with its own set of highs and lows…the highs including the limited crowds, beautiful mix of woodlands and ocean views, and the lows being that our car was broken into. Wah-waaaah

Our first night in the area we parked the car on a road outside Patrick’s Point State Park to watch the sunset, only to come back and find the passenger window shattered and my purse gone. Luckily, I had my wallet and cellphone on me so all the thief got away with was my passport and checkbook, a pain but not as bad as it could have been. We had the window repaired the next day and made all the required calls to the state department and our bank, we were quickly back on track exploring the area.

We found a cozy little county park with access to both the beach and a fresh water lagoon where we spent a few days exploring. The kids had fun collecting rocks on the beach and during a canoe paddle we stumbled upon a large herd of elk grazing in the marsh grasses on the banks of the lagoon. 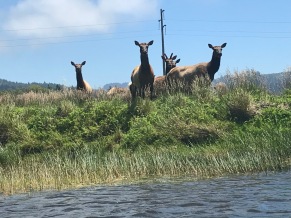 Liam and CJ had a great time playing with two girls camping next to us. We went on a banana slug hunt together and found a plethora of the oddly colored gastropods inching along all over the forest. Somehow their bright hue made them less icky to look at then their slimy grey brethren.

We went on several hikes through the Redwood forests, the most notable being Fern Canyon – literally exactly what the name implies. A small canyon whose walls are covered entirely with different species of ferns. Part of Jurassic Park 2 was filmed there and immediately upon entering you could understand why the producers might have picked the spot, it certainly had a prehistoric feel to it.

My favorite walks though were those along the rocky coast. We spent several hours exploring tidal pools or just sitting on ledges watching the waves explode into the large rock formations out in the water. We found sea anemone, gooseneck barnacles, hermit crabs and fish flitting about in the water.

The vandalism on our first day wasn’t enough to tarnish the area for me. It was the perfect mix of forest and ocean and I would love an opportunity to go back. Not to mention (as I write this in the 95 degree heat of eastern Oregon), the cooler temperatures!