If Kings Canyon was a quiet park removed from the crowds, Yosemite was its complete opposite. Swarming with hordes of people, Rick and I often found ourselves quoting Edward Abbey and some of his more extreme solutions to preventing Slobivius Americanus from overwhelming our National Parks.

There were no available campsites in Yosemite, but thankfully we were able to find a site outside the park in the Stanislaus National Forest. Due to long driving times between where we camped and the different sections of the park, we split our time exploring Stanislaus NF near our campsite and battling the masses in the Yosemite Valley. Nearby, we enjoyed a short hike to Carlon Falls, which cascaded from a rock face as wide as it was tall into deep pools carved into smooth rock where the clear turquoise water collected. Rick and I had fun jumping into the icy central pool, while the kids splashed around in the smaller holes nearby. 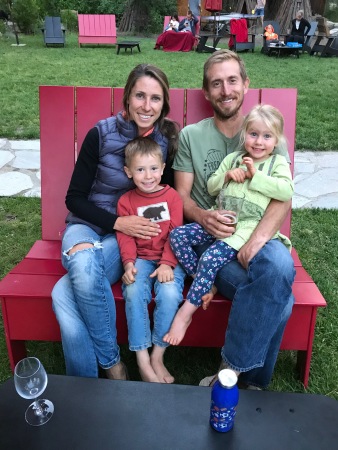 In addition to Carlon Falls, we enjoyed afternoons cooling off in the river near our campground. Rick even managed to catch some trout using the kids’ nets – a feat he was very proud of considering there were some fly fishermen up river who came up empty handed despite all their gear.

Also nearby, was a swanky mountain resort, which I used most mornings to mooch off their free WiFi for work and even snuck in a shower at their posh bathhouse. They also provided live entertainment, which all four of us enjoyed one night. Rick and I got some drinks at the bar and sat back in large Adirondacks on the lawn to listen to 60’s rock covers while CJ twirled to Jefferson Airplane’s, White Rabbit. Rick wore his cleanest t-shirt so we went unnoticed by the paying guests…

Inside the park, we saw Yosemite Valley by bike, canoe and foot – anything to avoid driving through the mob. These were long days, rising early and packing up for the entire day so that we could secure a parking spot by 8:30 am. We saw our first bears of the whole trip – a momma with her two cubs, one cinnamon and one black high up in the trees while mom foraged in the meadow. 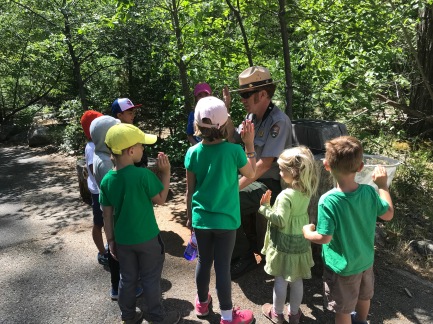 Our final day was spent exploring the most beautiful portion of the park, Tuolumne Meadows. Far removed from the Valley’s crowds, the road to the Meadows passes by alpine lakes and high mountain peaks. The meadow itself is an extensive swath of vibrant green framed by snow-capped mountains and accompanied by the pristine Tuolumne river that runs through it. We climbed a granite peak to look down on the meadow then wandered through the grasses where we spotted deer after deer grazing in the evening. If we ever return to Yosemite, we will be spending all our time at Tuolumne immersed in the beauty and solitude.

Picnic by an alpine lake on the way to Tuolumne

Rick and the kids climbed to the top

Liam points out the meadow 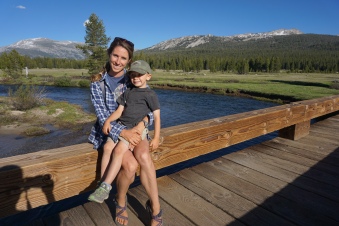 Pausing to enjoy the river running through the meadow 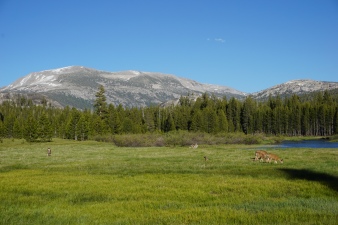 Deer grazing as we said goodbye to Tuolumne

One thought on “Yosemite and THE CROWDS”