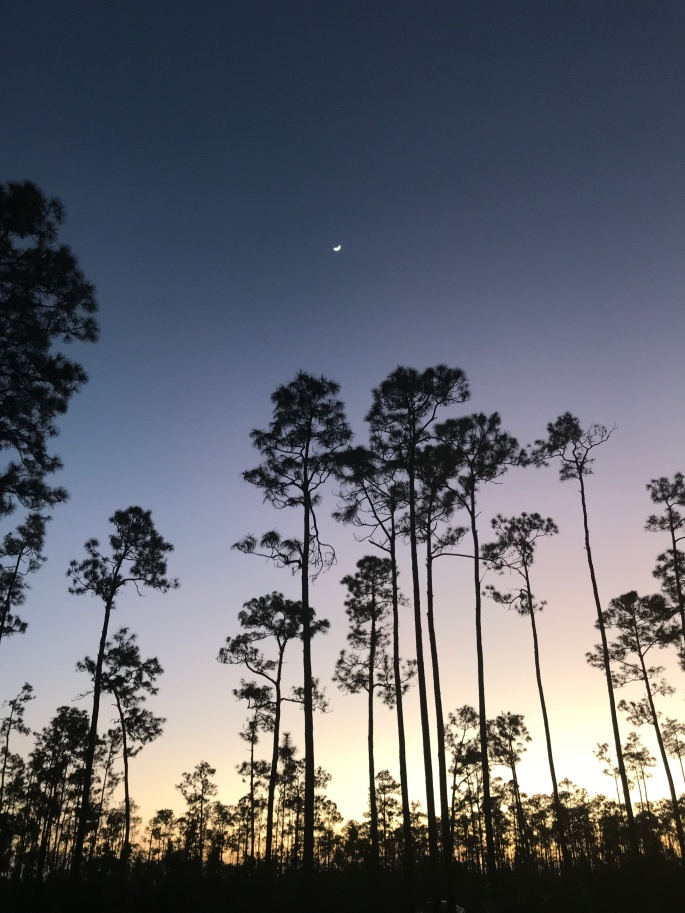 Our first night in the Everglades we went on a ranger-led night hike along the popular Anhinga Trail which follows paved paths and boardwalks through a very pretty waterway full of wildlife. The ranger gave a wonderful tour and I continued to be reminded of something he told us throughout our visit to the park.

He said, “The parks out west, like Grand Canyon and Yosemite, they shout at you, it is obvious why they are designated National Parks and why people flock to them. But the Everglades, it whispers.”

This became more apparent to me the longer I spent time here and learned about the uniqueness and fragility of this park. It is of course beautiful just for it’s solitude, and expansive landscapes, but even more so when you realize that it is one of a kind, there is nothing like it anywhere else in the world. And this unique place on earth has been teetering on the brink of disappearing for the last 80 years. 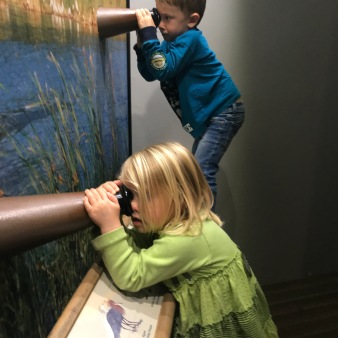 Sight from the sawgrass prairie

On one of our hikes, check out the air plant in the tree

What at first just appears to be a swamp, you realize is a vast and complicated series of waterways, with water flowing in and out supplying birds, mammals, reptiles and amphibians with a robust but delicate home. Hunting, development, and agriculture have brought the Everglades and its inhabitants to the brink of extinction on multiple occasions and continue to threaten the delicate balance.

Only 20% of the original area that was the Everglades still exists. 90% of the bird population has disappeared, starting in the 1800s when birds were shot for their fashionable plumage and another mass eradication in the 1940s following development for farms and cities. While paddling and walking through different areas of the park, we saw signs of the continued threat the Everglades is under. Agricultural runoff has changed the chemical balance of the water, invasive species abound, and one particular hike showed disturbing signs of either chemical pollutants or climate change or both. 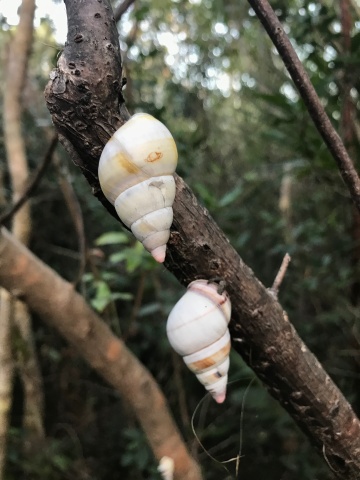 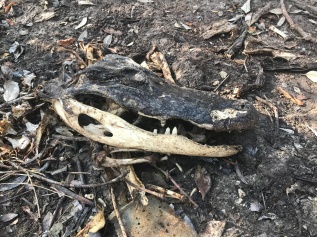 One of two alligator skulls we found.

The Everglades’ beauty is not something that hits you over the head. It’s a place you have to explore, understand, and observe to fully capture its beauty. It was originally preserved not for its looks, but for its biological resources. And that is what you understand and appreciate once you spend time here. The seemingly endless prairie is actually a river that you are able to walk or paddle through, incorporating hardwood hammocks, mangrove forests, sloughs, and estuaries. Alligators, American crocodiles, manatees, turtles, snakes, hundreds of bird species, and more are easily viewed on any of the park’s trails. We feel lucky we got to explore this beautiful wilderness and share it with our children. We hope more people will come explore it and cherish it, in the hopes that more can be done to save this precious resource. 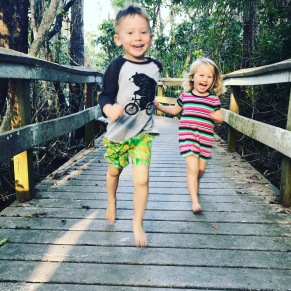 L and CJ loved running on the boardwalk trails

Large diamondbacked rattlesnake we found on a hike, gave us a warning rattle

This Anhinga or snake bird had L and CJ cackling when it almost pooped on them! 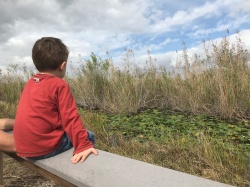 L enjoying the view, there are two yellow bellied sliders in the water 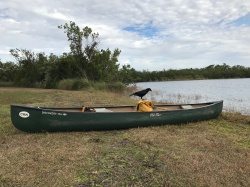 Paddling through the mangroves 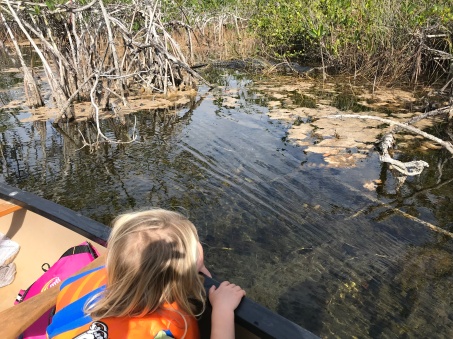 Visiting the Nike Missile site, a relic of the Cold War in the Everglades

The largest gator we’ve come upon and we had to paddle right next to him to stay on the trail…see the white pole?

2 thoughts on “The Everglades Whisper”